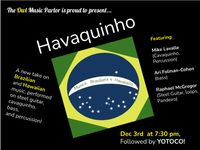 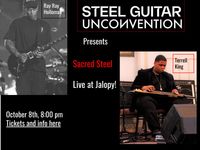 Sacred steel phenomenon Terrell King has performed with the Campbell brothers, Kashiah Hunter, and a wide variety of other sacred steel bands, and was a featured artist at the 2021 Steel Guitar Unconvention. He is joined by the legendary Rayfield "Ray Ray" Holloman, who is currently a touring member of Eminem and Robert Randolph's bands. Backed by Mike Lavalle (bass) and Bill Campbell (drums), this will be one you don't want to miss!

Mike Lavalle and Raphael McGregor have been playing Brazilian music for years in bands such as Scott Kettner's Nation Beat, Mike Lavalle's Forro Party, and Rob Curto's Forro for All. Their latest project, Havaquinho, presents Brazilian classics in a stripped-down setting featuring steel guitar and cavaquinho, which highlights the melodic and harmonic intricacy of forro, samba, and choro.

Jalopy will be following all state and city distancing and capacity guidelines, along with providing UV powered air filtration and adequate ventilation. We will also be requiring all who attend to show us proof of the following... Being fully vaccinated and it has been 14 days or longer since your final shot. Attendees must follow all mask, distancing and hand washing guidelines when in attendance. If you are vaccinated in New York, we encourage you to use Excelsior Pass to prove your vaccination. Excelsior pass is an app for your phone that can hold your vaccination and testing data. Download Excelsior Pass in the apple store or on google play. NOTE: We will also accept other forms of proof of vaccination from other states including CDC Vaccination cards (with photo id), etc.

A special holiday edition of the Guitarra De Aco project, featuring Brain Cloud singer Tamar Korn!  We will do some unexpected songs to celebrate the first night of Hanukkah, Christmas, and the holiday season in general.

Raphael McGregor is one of the most in-demand steel players in New York City. Since moving to Brooklyn in 2002, he has had the opportunity to perform and record with a wide variety of renowned musicians, most notably Willie Nelson, Darol Anger and Michael Manring, Adam Levy, Jason Loughlin, Emmy-Award winning composer Paul Brill, Alan Harris, Noam Pikelny, Matt Munisteri, Cyro Baptista, and Chas Justus and the Red Stick Ramblers.  For eight years he was the guitarist and steel player for the international touring act Nation Beat, which performed all over North America and Brazil, including such notable venues as Farm Aid, Montreal Jazzfest, Porto Musical in Recife, Brazil, Stern Grove, the Hollywood Palladium, Globalfest, and New York's Blue Note. As well as being an in-demand sideman for many acts in the New York City area, Raphael is the steel player for the Brain Cloud and regularly leads his own bands.

In 2013, Raphael released his first CD as a leader, Fretless, which continues to garner critical acclaim and is available on CdBaby, Itunes, and in other major digital distribution outlets.

In 2018, Raphael co-produced the Steel Guitar Unconvention, a celebration of steel guitar music in Brooklyn. The festival is in its third year and has featured artists such as Doug Jernigan, Lucky Oceans, Kashiah Hunter, Dave Easley, Susan Alcorn, Mike Neer, and many other local and national musicians. In 2019 Raphael received a grant from the Brooklyn Arts Council to put on the festival for its second year.